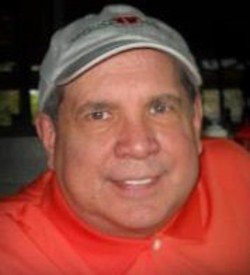 BENNETT, Richard J. “Rick”, 56, of Tampa, passed away at home on June 8, 2012.  He was a long-time video editor in the Tampa Bay area and owner of Naked Eye Editorial. Throughout his career, Rick was the recipient of numerous Addy awards and received a National Sports Emmy nomination for videotape editing on NBC’s Ironman Triathlon World Championships. He was an accomplished boater and sailor. It was an on-going joke that he just couldn’t catch a fish - despite many tries. He was a race car enthusiast and had a life-long love of Porsches. He was preceded in death by his father, John James Bennett III; sister, Laura Ann Duncan and brother-in-law, Richard Benzing.  He is survived by his loving wife, Kathy Bennett; mother, Marjorie H. Bennett; sisters, Nancy Pritchard (Michael) and Barbara Benzing.  Rick was a beloved husband, son, brother, uncle and father to his two dogs. He will always be remembered for his great wit and fun-loving ways. He was the rock we all stood on and will be sadly missed each and every day. There will be a private, family only gathering to celebrate his life.  Donations in his honor may be made to the Humane Society of Tampa Bay.

To send flowers to the family or plant a tree in memory of Richard Bennett, please visit Tribute Store

Share Your Memory of
Richard
Upload Your Memory View All Memories
Be the first to upload a memory!
Share A Memory
Send Flowers